Posted by Doug Miller on 11/27/2012 to Configuration Examples

Touch-based tablets are all the rage and more and more boaters are looking for ways to use a tablet for marine navigation and AIS target display. Up until recently, the Apple iPad has been the tablet of choice for most people but with the release of Microsoft Windows 8 and an increasing number of tablet PCs available, a Windows-based tablet is also a viable option. Since tablets are portable devices, wireless solutions are definitely the way to go and fortunately again there is more than one way to solve the wireless connectivity challenge. This article looks at a few possible ways to integrate a wireless tablet-based marine charting solution with your other marine equipment. Each of the proposed solutions assumes you will want as a minimum both GPS and AIS data streamed to your tablet, allowing you to see your own position on a digital chart as well the other vessels using AIS. 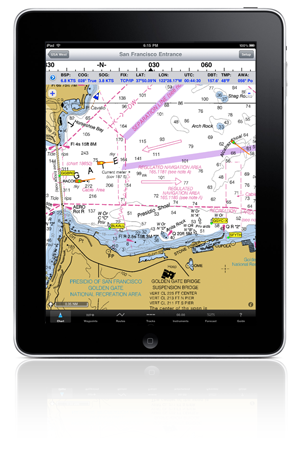 The Apple iPad is currently the most popular tablet in the market today. Part of its popularity is due to the wealth of applications that are available for the platform. There are numerous marine-related applications for the iPad but in our experience, the iNavX product stands out as the most functional marine navigation product for the serious boater. One of the primary features of this product is its ability to source instrument data by connecting to remote devices using WiFi. The WiFi data source could be located on the boat (as we’ll see below) or could be a data source from a remote AIS network. For this article, we’ll assume you will want to connect to other onboard marine equipment such as an AIS transponder using an onboard WiFi gateway solution. Note that while the iPad supports Bluetooth, there are few if any Bluetooth AIS devices that are certified to run with the iPad.

While the x86-based Windows 8 sports a new touch-oriented user interface, it is still Windows under the covers which means that applications that work on Windows 7 will generally work just fine on Windows 8. This is good news for people who have already invested in Windows-based navigation solutions and want to extend these solutions into the world of touched-based tablets. Again, there are dozens of marine-related applications for Windows but Rose Point Navigation’s Coastal Explorer is our pick for use on Windows 8 touch-based tablets. While Coastal Explorer has not yet been optimized for a touch interface, it actually works very well given its large icons and support for things like pinch-to-zoom. Coastal Explorer also supports using network-based sources as data feeds. In addition, many Windows-based tablets include Bluetooth, which allows for even more possibilities for connecting to some types of marine equipment. [NOTE: Coastal Explorer does not work on ARM-based Windows 8 devices such as the Microsoft Surface with Windows RT).

With that brief introduction to the two tablet platforms, let’s look at four different options for connecting your tablet wirelessly to your marine AIS /GPS device.

Use a PC to Broadcast NMEA Data

If you already have Coastal Explorer running on your PC, you can use the Data Server functionality to rebroadcast all the NMEA data that Coastal Explorer knows about out a network port which you can then connect to from a wireless tablet. You can either connect the PC and tablet to a wireless router or you can setup an ad-hoc network between the PC and the tablet. An alternative is to use GPSGate to take inbound serial data from an AIS transponder or other device and redirect it out a network port. Both these methods will allow you to connect iPads with iNavX and Windows tablets with Coastal Explorer. More information on these approaches can be found in our AIS on the iPad article.

Use the Comar NMEA-2-WiFi Converter to Broadcast NMEA Data

If you have existing NMEA instruments, including an AIS receiver or transponder, then the 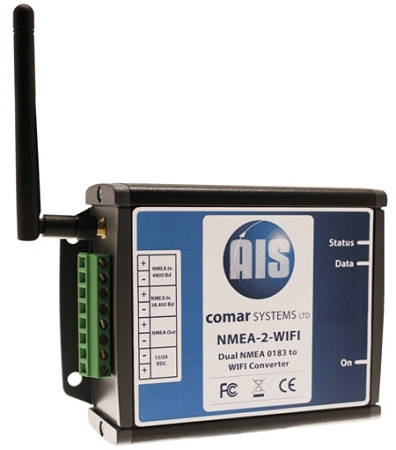 Comar NMEA-2-WIFI NMEA to WIFI Converter may be the best option for sending your NMEA data over WiFi to your tablet. This product allows you to connect two sets of inbound NMEA data wires – one pair at 4800 baud and one pair at 38400 baud to the device. It will then multiplex the two data streams together and output the combined data out a wireless network port. For example, you could have the NMEA output from a chartplotter connected to the 4800 baud line and your AIS transponder or receiver could connect to the 38400 baud line. Your tablet would then connect to the network port and be able to use all the NMEA data. This method will work with both iPads with iNavX and Windows tablets with Coastal Explorer but has the limitation that only one device can connect to the wireless data port at a time.

If you are looking to connect a Bluetooth-enabled Windows tablet to an AIS transponder then a very simple method for getting AIS and GPS data to the tablet wirelessly is to use the Bluetooth version of the AMEC CAMINO-101 Class B transponder. Simply search for Bluetooth devices from the tablet, connect to the CAMINO-101 and use the Bluetooth serial interface with your marine navigation software. Unfortunately this method does not work with an iPad since the CAMINO-101 has not yet been certified by Apple as a supported Bluetooth device.

The latest solution to hit the market is the new Vesper Marine XB-8000 Class B transponder. This wonderful device has more connectivity options that any other device we 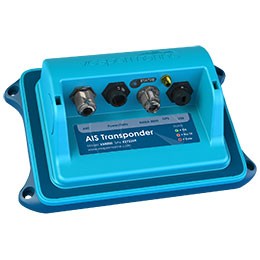 know of on the market. It supports connectivity via WiFi, NMEA 0183, NMEA 2000 and USB. If you are looking at buying a new Class B AIS transponder and want the maximum number of options for connecting to other equipment then this is the AIS device for you. For wireless connectivity to a tablet, you can use the built-in WiFi capability to connect up to 5 wireless devices which can all use the AIS and GPS data that is broadcast by the device.

As you can see, there are lots of options for wirelessly integrating a tablet with your vessel’s marine navigation systems. By having an extra wireless device that can be carried with you anywhere on the boat, you expand your options for planning or viewing important marine data while underway.

If you are interested in learning more about any of the solutions mentioned in this article feel free to send us an email or call us at 1-206-299-2217 for more information.

Garry Rhyne
Reply
doug , We have a client who is wanting to have his boat wi-fi only no chartploter,he has a androud with windows 7 and wants to pull up his ais and all other chart info. Am i correct in reading that to do that he will need to have a laptop running and transmitting a wi-fi signal?and also have his ais hooked to the laptop? or is there somekind of black box that runs a chartplotter program and reads a ais and sends out the info on wi-fi . thanks garry rhyne rhyne marine.
Matthew Bastian
Reply
I have done something similar on a research aircraft. Simply get an RS232 to Ethernet converter (eg. DigiPortSp good example). These will support UDP and TCP. Then on the PC side if the s/w doesn't support network feeds, use a virtual com port. This way I can get multiple pc's to read a NMEA stream(s).
Bill Forde
Reply
Great Information. In My instance, I already have everything connected to my Laptop at the chart table. I use Transas navigator and I have everything on that. I use an old samsung galaxy 10" tablet in the cockpit permanently wired for power which is built into my boats control panel. I have a wireless router attached to the PC and I use VNC to relay the laptop screen to the tablet screen. add a waterproof wireless keyboard and mouse which is located infront of the tablet but connected to the chart table laptop and it completes the picture . All this is very simple to setup and very cheap. I Have a masthead 28x optical zoom PTZ cameras and a retractable under water camera on the bow as well as a nightvision camera with a separate powerful IR light which allows me to see ahead perfectly in the dark at night whout spoiling my night vision.all the video from these cameras as well as all instrument and chart data and AIS from my new Camino classb transponder is all relayed wirelessly to the tablet screen which I can control from the waterproof keyboard and mouse . The Tablet cost me 80$. Simple solutions are best. I am working on video sampling of the view from the night vision camera to auto warn and possibly steer around obsticles the camera sees as I sail along at night. I am also working to build the control panel to bring all sensors for everything on the boat into 1 panel. This panel will also have a wireless handheld remote control that can operate throtle fwd reverse steer operate anchor electric winches deck lights boarding lights and more. It will be possible when standing on the dock to wirelessly start the engine raise the anchor engage fwd and steer the boat from a mooring to the dock where Im standing. All this is in preparation for my circumnavigation in 2015.
ASHAR SARFRAZ
Reply
hy, i want AIS for my boat but i want to see all data on tablet because it is difficult to carry laptop . i have read solution. i want to buy one. at what price i can get tablet interfaced with AIS via wifi.
Joe Bentley
Reply
I have a ICOM MA-500TR with NEMA 0183 output, also have a ICOM IC-M412 VHF with DSC, Networking to a Garmin GPSMAP Chartplotter. Looking to connect to a remote laptop to display chart and AIS targets. Can you direct me to an adapter for this function?
Guy Albrecht
Reply
Hi I am using a PC with Windows, a Comar csb200; Raymarine auto pilot and; a Garmin portable gps to download a copy of the routes in case of a problem with the pc. The navigation program is Open cpn. Everything connected via the pc usb ports. Everything works fine except that when the ais is on, functions as panning, and magnifying stop responding. How can I solve that problem? I am also considering to change the pc by a Windows tablet to reduce power consumption. Could you give me an advise? Best regards. Guy.
Doug Miller
You might want to check the device driver for the USB Serial Adapter you are using in Control Panel -> Device Manager -> Ports (COM & LPT). Look under driver properties and make sure "Serial Enumerator" is not checked. Otherwise maybe check with the OpenCPN forums.
christophe
Reply
What about Android tablets....