Posted by Doug Miller on 8/11/2020 to Products & Technology
This past week, we received our first shipment of Vesper Cortex V1 units. Cortex is a radical new concept that combines WiFi-enabled 5-watt SOTDMA Class B AIS technology, a multi-station VHF radio with AIS-assisted DSC calling and wide area vessel monitoring. This article documents some of my first impression upon unpacking and using the Cortex solution for the first time with a focus on the AIS and VHF functionality. A deeper dive on the monitoring functionality will be covered in a future article.
The user interface for the product line centers around color touch screen WiFi-enabled handsets that are available in wireless or wired models. The Cortex V1 product includes one wired handset and other wired or wireless handsets can be added and paired with the Cortex head unit (which is called M1). Cortex is also available with just the M1 head unit which is basically a WiFi-enabled Class B 5 watt AIS transponder but handsets can be added to enable to VHF functionality at any point. As of early August, the only Cortex product that is shipping – still in limited quantities – is the V1 model. The rest of the product line should be shipping soon. 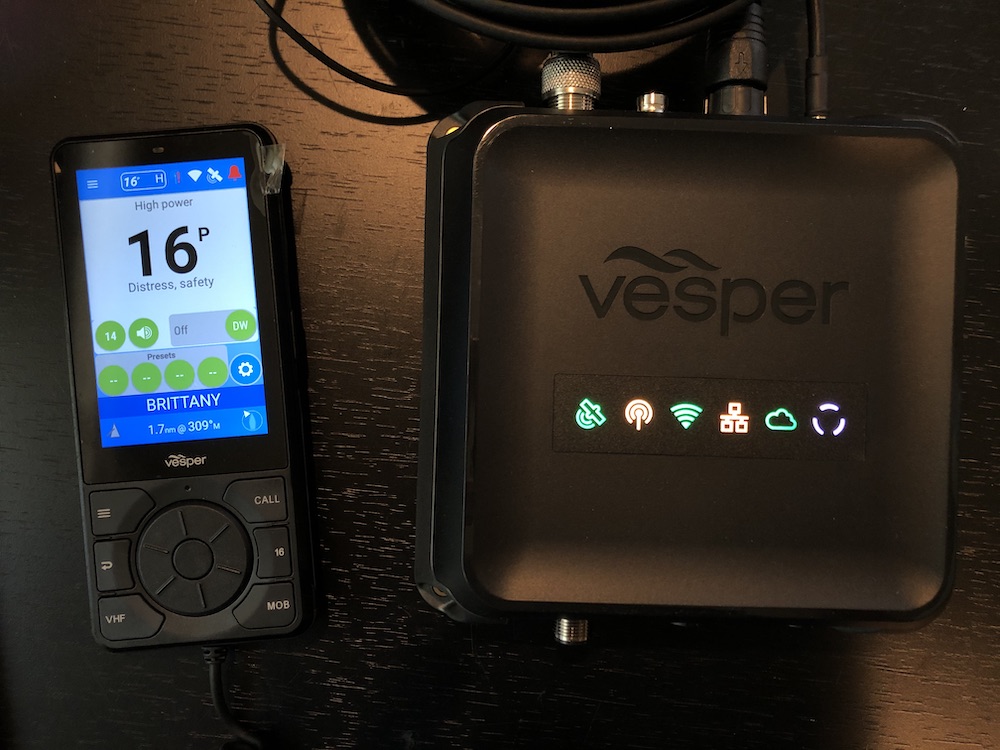 Unboxing the V1 package consisted of attaching the power cord to 12-24vDC power and to the unit, attaching a VHF antenna and the GPS antenna. There is a WiFi antenna that can also be used. In addition, there are NMEA 0183, NMEA 2000 and external sensor connections that you’ll want to use in order to send AIS data to other marine devices as well as to pull data from other sensors such as wind, depth and heading.  The H1 handset which comes with the V1 product must also be powered in order to be used. There is no wired connection between the M1 head unit and the H1 handset. Even the wired unit uses WiFi to communicate with the M1 head unit. Wired simply means it requires power to the unit via the attached cable. This means you can locate the H1 handset anywhere on your boat where there is power. The handset comes with a bulkhead mounting kit. With extra bulkhead mounting kits, you could easily move the wired handset from one station to another.
When the system is powered up for the first time it needs to be programmed. This is accomplished via the Cortex Onboard app for iOS or Android or using the menu system on a handset. I used an iPhone to program the first few units. When the app first launches it asks you to scan a QR code on the packaging to assist with pairing with the M1 unit. Once that is done, the unit needs to be programmed with your vessel information – which is a task that must be done by the dealer if shipping to a USA destination.
Once the programming is complete the unit is ready to use. On the AIS side, this works much like any AIS transponder. It automatically transmits your position and information to nearby vessels and it also receives broadcasts from other AIS vessels. This received information is then sent to other connected devices using NMEA 0183, NMEA 2000 and WiFi. Like other Vesper WiFi-enabled units, the Cortex will multiplex any data it finds on the NMEA connections and gateway it to other connected devices. For example, I connected the Cortex via WiFi to an iPad running iNavX. While this was not documented, I found the M1 IP address to be 10.1.1.1. I tried Vesper’s standard TCP port number of 39150 and presto, I had AIS data and more show up on iNavX. The same parameters can be used for any app that supports connecting to a WiFi datastream with NMEA 0183 data.
Moving to the VHF radio functionality, this is where things get really interesting. The Cortex handset is more than just a radio mic. While it has screens for selecting radio properties such as the channel or setting up dual watch, it can also show a WatchMate-style screen with nearby AIS targets, list targets or announce collision warnings. There are screens for customizing your unit including alarms as well as managing the renowned Vesper anchor watch system. One of the most useful features is the ability to select an AIS target from the screen or list and hit “Call” to initiate a point-to-point Digital Selective Calling (DSC) call to the selected vessel by leveraging the other vessel’s MMSI number – which is used by both AIS and DSC. DSC is something that every boater should use but has seen poor adoption because up until now it has been hard to use. It works by hailing the other vessel using a private digital message so that the other radio rings like a telephone. Only the target vessel’s radio rings. Once the hail is picked up or acknowledged, the radios will automatically switch to the channel chosen by the caller. While others can hear your conversation if they happen to be on that channel, DSC relieves you of having to constantly hail other boats and your buddies using channel 16. The new Cortex system makes it super easy to use DSC. Plus of course, since Cortex is a full-fledged Class D DSC radio, there is also a “big red button” on the handsets that can be used in case of an emergency to initiate an automatic distress call. It is important to note that DSC is an international standard supported in virtually all modern VHF radios. This means Cortex can be used to call just about any other vessel, assuming you know the other vessel’s MMSI once you know their MMSI number. 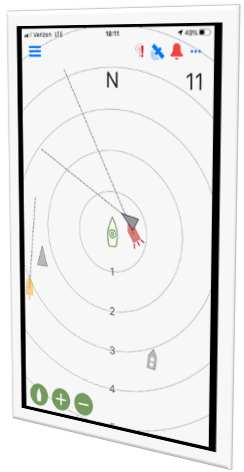 By pulling the MMSI from AIS and associating it with the boat’s name, the user does not have to key in an MMSI to make a call. Just find the AIS boat you want to call on the AIS list and hit the Call box on the touch screen. Note, you can have up to ten wired or wireless handsets associated with a Cortex system.
There are two mobile apps associated with the Vesper Cortex system available for iOS and Android.
The Cortex Onboard app is used for configuration and AIS functionality as well as setting up and responding to alarms. You can also interact with the anchor alarm system. You can view information about other nearby AIS targets in a graphical range ring format or a list. Important targets – or ones that have come within your collision warning parameters - are highlighted. This app is similar to the WatchMate app that is used with the Vesper smartAIS family.
The Cortex Monitor app is for customers who subscribe to Vesper’s vessel monitoring system that is part of Cortex. The system can monitor battery voltage, barometric pressure and boat position out of the box. Plus, users can connect other sensors for bilge status, temperature, NMEA 2000 sensors such as wind and depth and more. This system can be accessed remotely via a built-in cellular modem. Vesper offers two monitoring programs. The free program provides twice daily updates in the Monitor app. The Cortex Monitor Premium subscription program provides real-time vessel status, instant alerts and device control for boat systems like refrigerators, icemakers, lights or heaters. The Premium subscription costs $19.95 per month or $159.95 annually. One cool feature with the remote monitoring system is the ability to get anchor alarms even when you are not on your boat. I will do a more detailed review of the Monitoring capabilities when I can finally get a Cortex installed on my own boat.
For more information on Cortex, be sure to download the latest product brochure here and check the Vesper Cortex video series here.
Safe boating and as always, comments or questions are welcome.
Doug Miller
Previous Post
Next Post 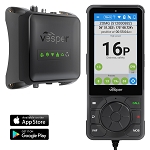 Jason
Reply
Great Article! Thanks for sharing and for the IP Address and Port Number! We just installed the Cortex V1 on our Manta Catamaran three days ago... so far, very impressed with it. Just connected to Aqua Map with the IP/Port#! Looking forward to understanding a bit more about the various sensors that can be purchased for bilge alarms and turning on cockpit lights. Those will likely be our first additions!
Joe Eckenrode
Reply
Will this pass NMEA over wifi via UDP or is it TCP only?
Doug Miller
Currently Cortex only uses TCP port 39150 not UDP.
Dan Winchester
Reply
Does Cortex understand signalk or transmit signalk?
Doug Miller
No. Currently Cortex can send or receive NMEA 0183 or NMEA 2000 data.