Posted by Doug Miller on 2/15/2020 to Configuration Examples

We are getting a lot of questions about the new and improved Navionics Boating app for Apple iOS and Android and how to make it work with AIS devices that include Wi-Fi support.
The latest version of the Navionics app now supports the display of AIS targets overlaid on the navigation chart. Selecting the AIS vessel icon displays additional information about the target. While the AIS support is still pretty basic compared to other apps such as TZ iBoat and iNavX, it is a good start and hopefully additional features such as collision alarms will be added in the future. It is also worth noting there are still some bugs with the AIS support. For example, some targets on some devices never show the vessel name - only the MMSI number. We have also had several reports of Navionics for Android not working with network devices. Again, hopefully these issues will be fixed in short order. In the meantime, we recommend using an iPad with Navionics and your wireless AIS device.
Fortunately, it is pretty straight forward to get AIS to work with Navionics. For this article, I will use the popular AMEC B600W SOTDMA Class B AIS Transponder with Wi-Fi support as the device connected to the Navionics app.
To start, make sure you have the latest Navionics “Boating” app installed on your iOS or Android device.
Next we’ll assume you have installed an AMEC B600W on your boat using the Wi-Fi Access Point defaults. The B600W creates its own Wi-Fi network to broadcast AIS and GPS NMEA data to mobile devices that join its network and passes the data to supported apps. The B600W can also join other pre-existing Wi-Fi networks on your boat using Client Mode but for this exercise, we’ll assume you use the default setup. Note the default IP address for the B600W is 192.168.2.1 and the default port number is 3333. The B600W uses TCP protocol by default.
If you have connected the B600W to a NMEA 2000 network and have other sensor data such as depth on the network or other NMEA 0183 devices, this data can also be passed Navionics and other apps that support marine data beyond just GPS and AIS. If you want to gateway and multiplex data from other devices such as depth sensors, be sure to turn on that feature using the AMEC AIS Configuration program which is available for a Windows-based PC or a Mac. After connecting to the B600W, click on “More…” in the top left Configuration quadrant, then “More…” in the “Advanced Configuration” section in the bottom right and check the box for “Enable NMEA converter”. 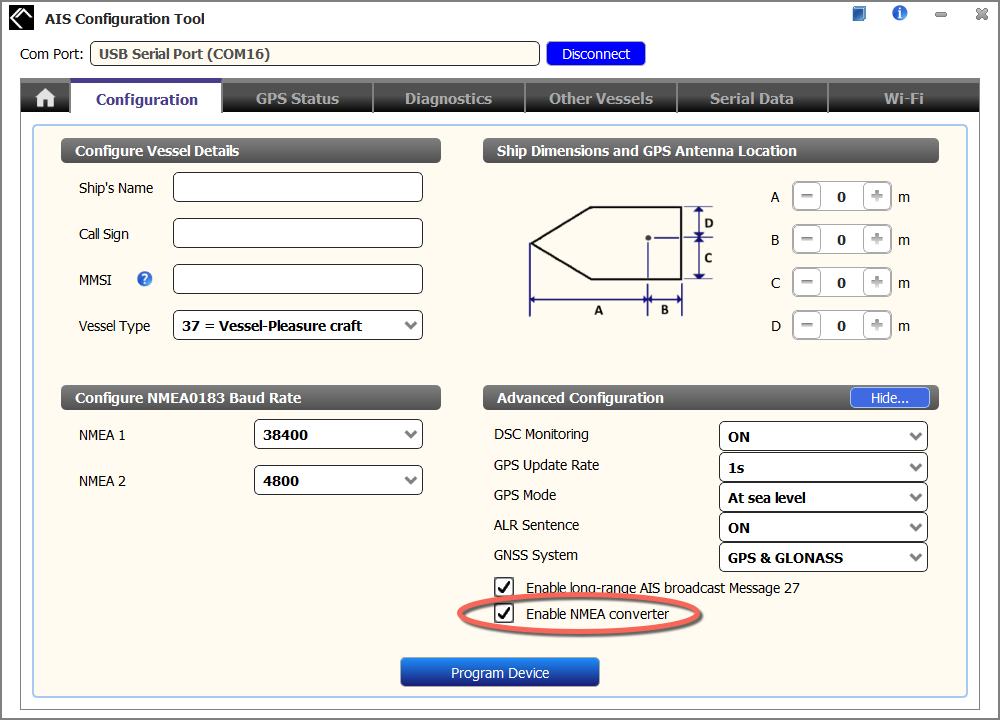 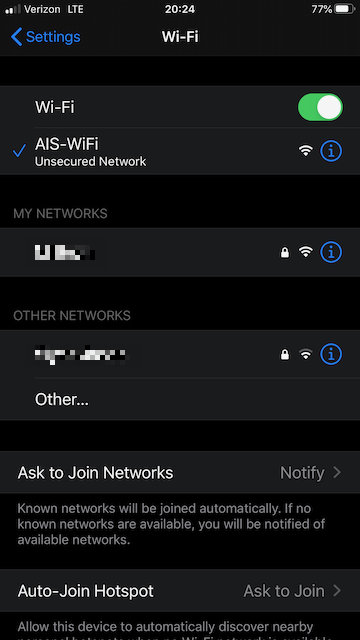 Note the B600W “AIS-WiFi” network has no password by default. You can use the AIS Configuration program to set a password if you like.
Now that your mobile device is joined to the B600W network, it is time to launch the Navionics app. If you are using the default network settings, there is nothing to configure in the Navionics app but it is worth checking the setup to ensure a connection to the B600W has been established.
In the Navionics app, click on “Menu” on the bottom right, then scroll down and click on “Paired Devices”. Select the line with “McMurdo – AMEC” to open up the properties for this connection. It may take a few seconds, but you should see “Connected” as well as the connection status for Sonar (if multiplexed depth data is being sent by the B600W), AIS and External GPS. 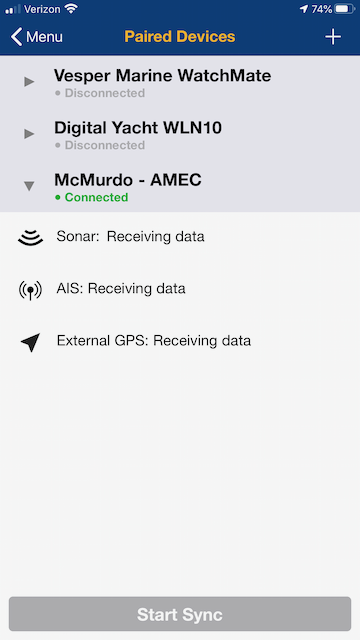 Now go back to the chart display by clicking on “< Menu” on the top left, and then “X” on the top left.
You should now see your Navionics chart screen with green AIS ship icons showing up on the chart. If you want your own vessel in the center of the chart, click on the diagonal arrow in the dark blue circle on the bottom left. Your vessel should show up with a red arrowhead. 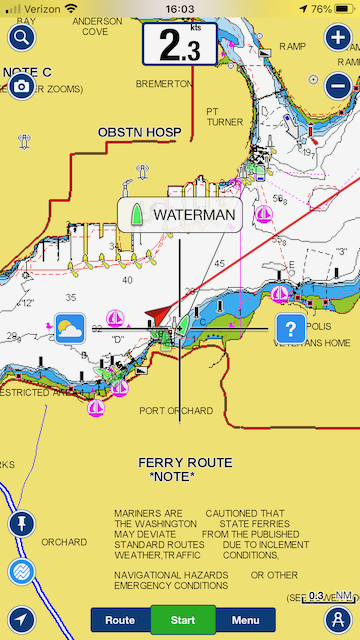 If you click on a green AIS vessel icon you will see more detailed information on the AIS vessel. In some cases, you will only see the vessel MMSI number and not the vessel name. It may take up to 6 minutes for the full vessel information to be displayed. 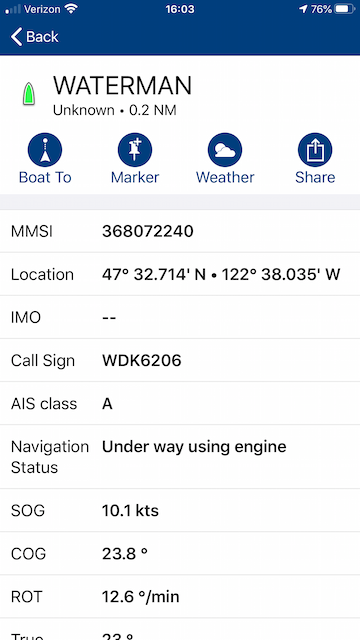 You will also see your speed and course over ground in the top left of the screen. If you have multiplexed depth data in the Wi-Fi data stream coming from the B600W, then you will also see a panel with that information on the lower left corner. This information can be used with the Navionics SonarChart system to map out more detailed depth contours for as you proceed on your route.
The setup is very similar for other supported AIS devices such as the Vesper Marine XB8000, the AMEC CAMINO-108W and the em-trak B360. We have tested each of these with the Navionics app and each worked in a similar way, i.e. connect to the Wi-Fi network broadcast by the AIS device and then launch the Navionics app which should auto-configure itself to use the AIS device data stream. Other Wi-Fi gateway devices, such as the Comar i320w should also work in a similar way.
Note, if you are using a device that is not natively supported by Navionics or you have changed the Wi-Fi or network settings for your B600W or other device, it is still possible to make it work with Navionics. In the Navionics app, click on “Menu” on the bottom right, then scroll down and click on “Paired Devices”. Select the “+” on the top right, click on “ADD DEVICE” at the bottom. On the “Add device” screen, add a friendly name in the “Name” field, the IP address for your device you are connecting in the “Host” field, the IP Port in the “Port Number” field and click on “TCP” or “UDP” depending on the type of connection required for your device. For example, on my own boat, I have joined my B600W to my Garmin Wi-Fi network which means I have a non-standard IP address. By using the AIS Configuration program I was able to join the Garmin network and note the new IP address assigned by the Garmin network. I then enter that new IP address on this screen. Then be sure to click “Save” on the top right. 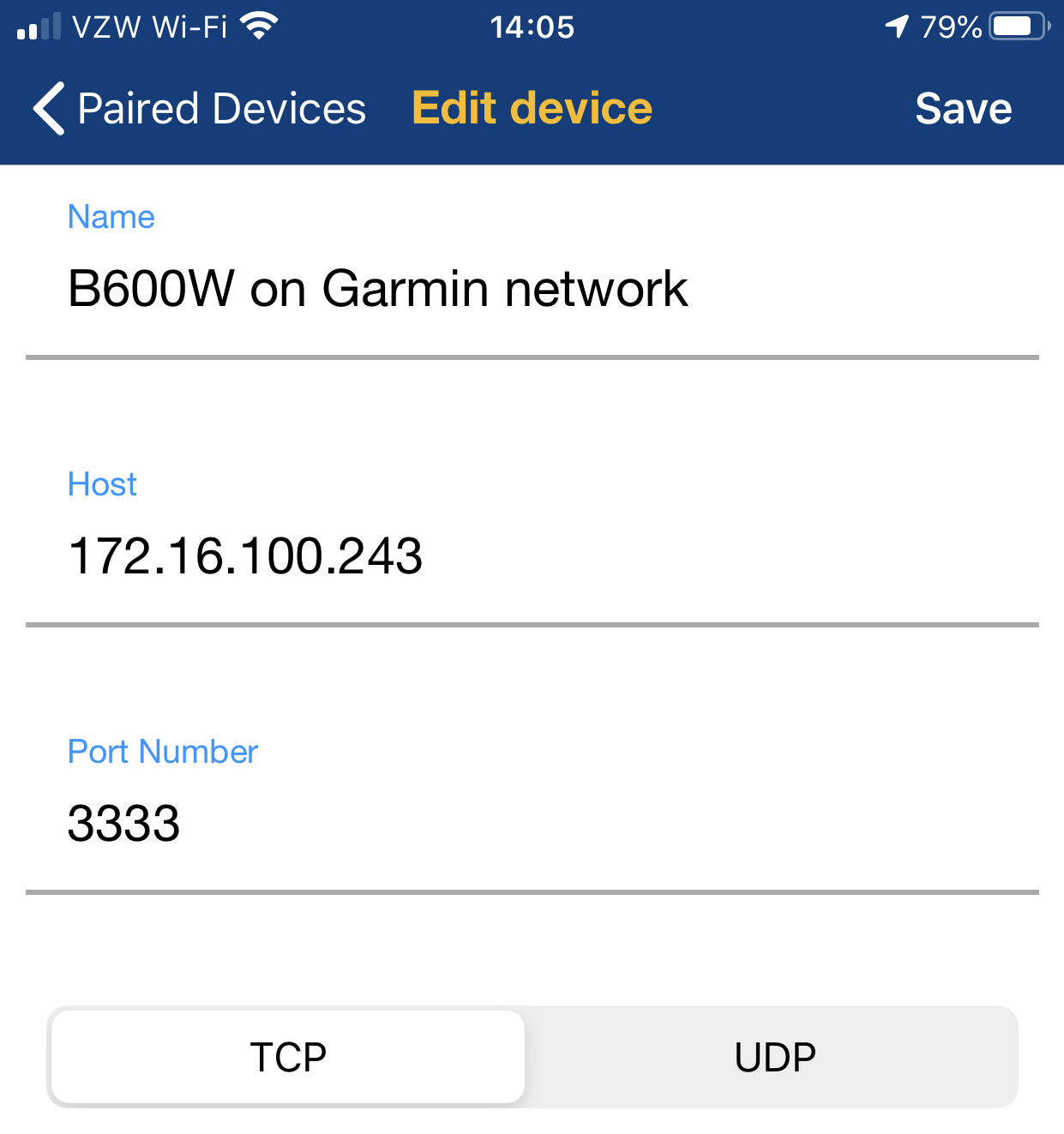 It may take a few seconds, but you should see “Connected” as well as the connection status for Sonar (if multiplexed depth data is being sent by the B600W), AIS and External GPS.
That’s it. If you are not seeing AIS targets, ensure that a) your B600W is on b) you are connected to the “AIS-WiFi” network and c) check the Paired Devices screen in Navionics to make sure it sees your device.
Enjoy and Safe Boating!
Previous Post
Next Post