Posted by Doug Miller on 6/26/2019 to Configuration Examples 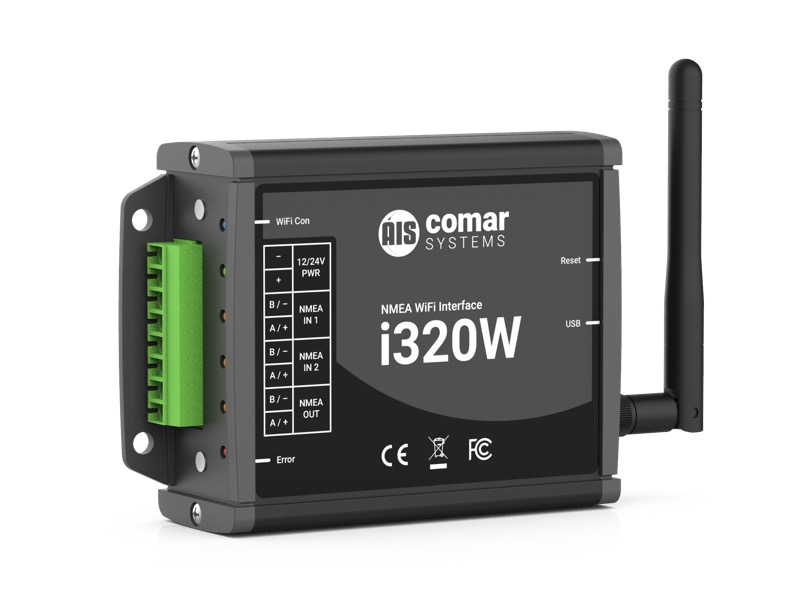 UPDATE: The latest Navionics Boating app for iOS and Android now supports AIS and GPS data sent over Wi-Fi. The the solution described below also now works for the Navionics apps.  We have also updated this article to refer to the latest Comar WiFi Gateway, the Comar I320W NMEA to WiFi Interface Gateway

The Standard Horizon GX2200 AIS Matrix VHF radio is one of our most popular products. This radio has built in AIS and GPS receivers and makes a nice self-contained AIS system - not to mention a great VHF radio. In a previous post I provided the steps for connecting this device to a computer using a USB cable. But what about doing this wirelessly to other computing devices such as an iPad? Fortunately this is possible and very easy to do with one of our Wi-Fi adapters such as the Comar I320W NMEA to WiFi Interface Gateway. Plus this can be done for less than $300.

The goal here is to take the AIS, GPS and DSC NMEA data sentences that are normally sent out the GX2200 data output wires and convert this information into a wireless data stream. Then we can have wireless devices, such as an iPad, connect to the adapter's Wi-Fi network and apps then attach to the data stream so that the information can be used by a marine navigation app such as iNavX. When this is completed, you will have a true GPS position on your iPad and your marine navigation app will display real-time AIS target information.

While this post focuses on connecting the GX2200 to an iPad using Wi-Fi, the concepts are the same for connecting any marine electronics device that outputs NMEA data using a pair of NMEA output wires and sending that to any Wi-Fi-enabled device that supports using NMEA data over a network connection. For example, this could just as easily be used to connect a Garmin chartplotter network to a wireless PC running Coastal Explorer.

Before walking through how to connect these products together, it is worth reviewing what each product does. 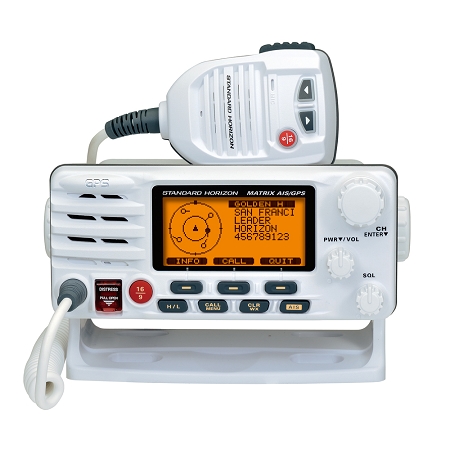 Standard Horizon has been making marine radios for years but last year it launched a new AIS Matrix radio that has integrated a dual-channel AIS receiver and a GPS receiver in a standard marine VHF radio form factor. With the built-in GPS, not only do you get full DSC functionality, but you also get a mini AIS display showing a radar-like view of nearby vessels. To call an AIS vessel, you simply select the vessel on the display and hit the CALL button. Another major benefit is that you only need one VHF antenna connection to get both AIS and VHF radio support. No additional antenna splitter is required. The AIS data that is used by the internal display can also be used by external devices that support AIS by hooking up the radio’s AIS output wires to the other device’s input wires. These output wires can carry GPS and DSC NMEA sentences as well. The most common integration scenario is hooking the Matrix up to a chartplotter but we are now getting requests from customers asking to use the output data from the radio with their iPads. Since the iPad does not easily support a wired connection, the obvious way to do this is via a wireless connection. Since the GX2200 does not support wireless connections, we need a wireless adapter to make this work.

The Comar I320W NMEA to WIFI Interface Gateway is a product designed to take a wired data connection using RS422 (an isolated wire pair protocol commonly used for NMEA-based marine devices) and converting that information into a wireless data stream that can then be used by wireless devices that "join" its Wi-Fi network. The Comar product is powered via the the boat's 12-24 volt DC power. The device can be mounted in any orientation and its Wi-Fi antenna can be positioned for use in either horizontal and vertical orientations. The device has two NMEA inputs - one at 38400 baud and one at 4800 baud and one NMEA output at 38400 baud. Its internal multiplexer allows you to combine data from two difference marine devices - such as a GX2200 radio using 38400 baud and a chartplotter using 4800 baud. The data from both devices will be streamed to the connected Wi-Fi device.

There are five basic steps to making this work correctly. Before starting, make sure power is off to the Comar device and you have powered on the GX2200:

Your GX2200 should now be sending its GPS, AIS and DSC information wirelessly to your iPad via the Comar I320W NMEA to WIFI Interface Gateway with the information displayed via the iNavX app on the iPad.

This completes the steps to wirelessly connect a Standard Horizon GX2200 radio with an iPad using the Comar I320W NMEA to WIFI Interface Gateway.

As always, we welcome your feedback. Feel free to comment below.

Klaus
Reply
Hello - some days ago I have read this article. Thank you for it. Because I live in Europe I have bought both devices in Austria. My problem now is that I don't know how to configurate the Serial to WiFi Adapter ATC-2000WF that I can connect it with my Standard Horizon Matrix GX2200 AIS/GPS Receiver VHF Radio. Can you be so kind and give me an advice how to make the settings for this device (ATC-2000WF)? Thank you best regards Klaus
Steve
Reply
I have a USR-WIFI232-610 serial to wifi adaptor, would this be suitable for this application?
Herb Stark
Reply
If I have two ipads with iNavX, will they both be able to log into the wifi and see AIS targets at the same time?
Doug Miller
Yes if you use UDP, you can have multiple iPads or other wireless devices connected at the same time.
Doug Miller
Reply
Yes, if you use the UDP connection method, you can have up to seven devices connected and receiving data at the same time. Instructions for setting this up are included with the product.
Dan Turk
Reply
Hello, Will the ATC Serial to Wi-Fi Adapter work on a Navionics app for android ? I am purchasing a SH GX2200. Thanks, Dan
Doug Miller
Unfortunately this will not work with the Navionics app since that app does not currently support inbound instrument data via a generic wireless connection.
Steve
Reply
Hello Doug, I have a Alluminium Trismus 37, I wish to upgrade my VHF to a GX2150 or 2200 Matrix AIS / GPS.. My concern is whether the GX2200 will work from the Nav station inside the yacht?? If not, can I fit an external GPS puck. Or would it make better sense to use the GX2150 Matrix AIS / VHF with an external GPS puck. Regards, Steve.
Doug Miller
The GX2200 has an internal GPS antenna. The optional external Standard Horizon "GPS antenna" is actually a GPS sensor that outputs NMEA GPS data as opposed to a traditional GPS antenna that is connected via coax. The best option is usually to use the GPS NMEA output from a chartplotter and connect that to the GPS NMEA input on the GX2200 if the internal GPS is not able to get a signal.
Daniel
Reply
Will it work with laptop wifi and/or Android devices?
Doug Miller
Yes, this will work fine with Windows PC, Macs and Android devices. Same concepts apply for each. Connect to the WiFi network and configure the app to use UDP and port 2000.
Adam
Reply
Which android nased navigation apps will this setup work with?
Doug Miller
A number of Android marine apps support a WiFi connection to a data server. These include: OpenCPN, iSailor, MemoryMap and SeaPilot.
Marty
Reply
Doug, I am wondering if your comment above is still true now that Navionics displays external AIS data?
jonathan Harold duehring
Reply
Doug, I am wondering if your comment above is still true now that Navionics displays external AIS data?
DOUG MILLER
Right, the latest Navionics Boating apps for iOS and Android now support AIS and GPS data over WiFi. The concepts in this blog article can also work for using AIS on Navionics.