AIS Transponders with NMEA Multiplexing: Why You Should Care 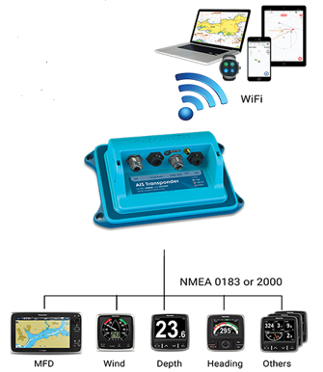 Most people think of AIS transponders as simply a device that sends and receives AIS information. Connect the NMEA 0183 or NMEA 2000 output from an AIS transponder to a modern chartplotter and you’ll see AIS targets on your screen. Or use the USB cable and send AIS as well as GPS data to your laptop for doing computer-based navigation.

More recently, vendors such as Vesper, AMEC and em-trak have also added models with Wi-Fi support. What does that mean? Wi-Fi allows you to connect your mobile device (such as an iPad, iPhone, Android device or PC) to the transponder wirelessly. Once connected, you can stream AIS and GPS data to your mobile device so that you can see real-time AIS target information overlaid on charts on supported navigation apps such as Navionics, TimeZero, iNavX or Rose Point Coastal Explorer. This capability has been super popular and gives boaters even more ways to leverage their AIS investment.

That’s all good but we often hear from the customers that they want more. More marine data that is. Many apps and computer nav programs can take additional marine data (such as heading, wind, depth) and show that information within the application.

The magic of multiplexing

Traditionally, if you wanted to send all your marine data from your NMEA 2000 or NMEA 0183 connected devices, you would need to buy a network-enabled multiplexer (such as ShipModul Miniplex-3 Multiplexer Series or the Rose Point Nemo Gateway), connect your devices to the multiplexer and then connect your mobile device to the same Wi-Fi network that the multiplexer uses. These products can also do conversions of NMEA 2000 data into NMEA 0183 data, which is more commonly used in mobile device apps. These types of devices are sometimes referred to as gateways. For example, if you had all your marine devices on a NMEA 2000 network, you could use a product such as the Actisense W2K-1 NMEA 2000 to Wi-Fi Gateway to magically grab the marine data on your NMEA 2000 network, convert it to NMEA 0183 and output it over Wi-Fi to connected devices.

These methods work really well; however, you of course need to buy the multiplexer or gateway to make it work.

There is another way to do this and is especially interesting if you are in the market for a new AIS transponder. Some models of Vesper and AMEC AIS transponders support multiplexing other types of data found on the NMEA 0183 interfaces as well as taking data from your NMEA 2000 network and converting it to NMEA 0183 sentences. All of this data is then combined or multiplexed together with the transponder’s GPS and AIS data and then all the data is output on the USB and Wi-Fi interfaces (if you choose a Wi-Fi model). You can then connect to the transponder (using USB or Wi-Fi) and have almost all your vessel information streamed to your mobile device so it can be used by apps that know how to process the various types of information. You essentially get a multiplexer / gateway for free when you buy one of these devices. em-trak AIS transponders can take NMEA data coming in on its NMEA 0183 inbound ports and combine it with the AIS and GPS data and output the combined data on NMEA 0183 ports and Wi-Fi for Wi-Fi models.

Why do I need this?

If you are trying to decide if you need this or not, let’s look at a couple of scenarios where this would be useful.

If you are a sailor and want to use the iRegatta app on your iPad to assist with racing, you would of course want to get real-time wind data along with GPS position, heading and even depth in order to make the app fully functional. A transponder with multiplexing capability or a dedicated multiplexer would be able to combine all the available data from the NMEA-connected instruments on our boat and send all of it over Wi-Fi to the iRegatta app.

Or imagine you want to run Coastal Explorer on a Windows Surface tablet and be able to not only see real-time position and AIS data but also depth, wind, water temperature, heading, rudder angle and more. And be able to do all of that wirelessly without being connected via USB.

Or do the same thing using TimeZero iBoat on an iPad. 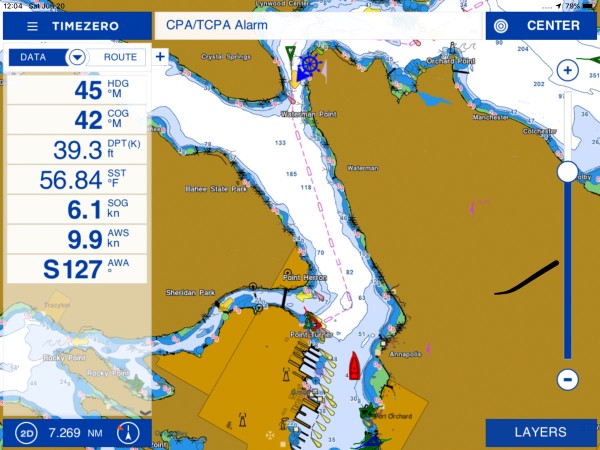 By making all your vessel data available to apps on your mobile devices or PCs, you are able to replicate most of the functionality of a dedicated multi-function display or chartplotter.

What should I buy?

All of these products support both NMEA 2000 and NMEA 0183 data inputs (the AMEC models have two NMEA 0183 input / output ports). All of them support converting NMEA 2000 PGN data to NMEA 0183 sentence data. And of course, they also output AIS and optionally GPS data over NMEA 2000 and NMEA 0183 to connected devices such as chartplotters. Vesper goes a step further and allows you to fine tune which data types you want converted and forwarded. 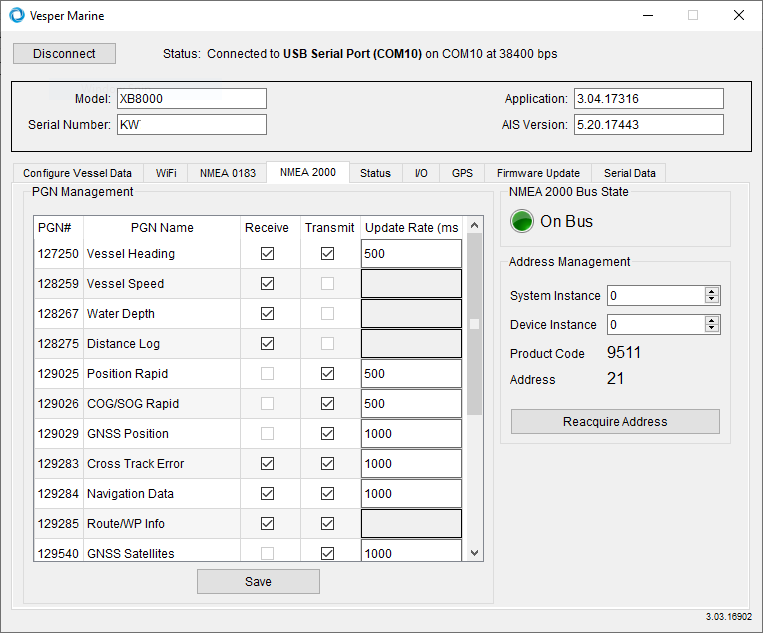 The AMEC B600 products do the conversions automatically when you check the “Enable NMEA converter” option in the AIS Configuration program. 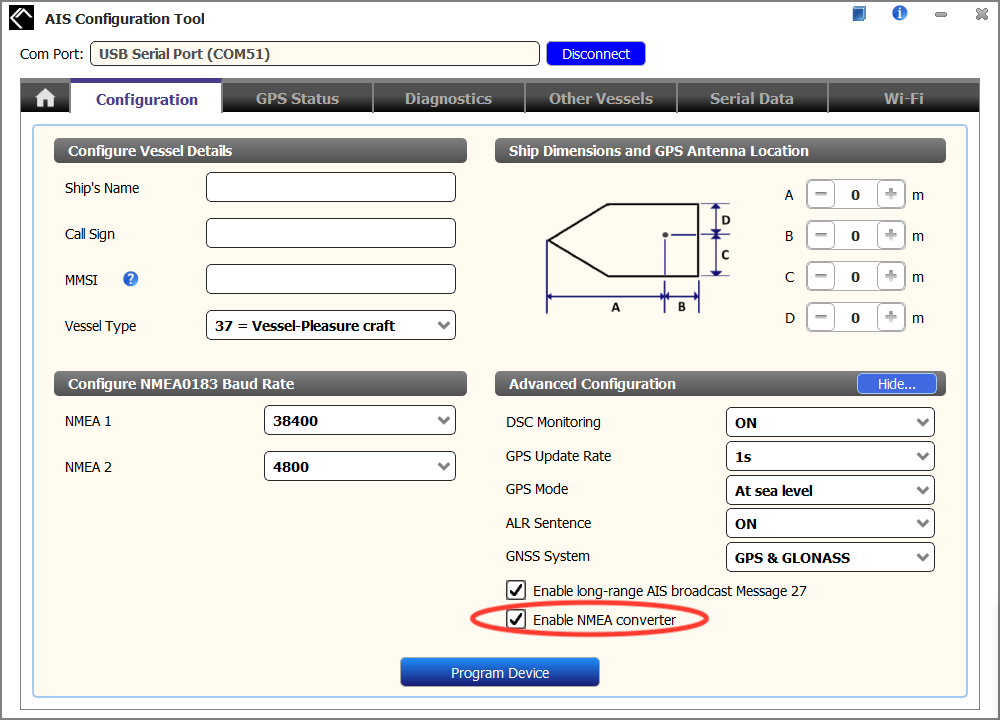 With your Wi-Fi-enabled transponder configured, connected to the NMEA data sources and turned on, it is then a simple matter of:

If you are using USB, then make sure the USB device driver is loaded on your computer then plug in the USB cable into the AIS transponder and the computer. Configure your application using the COM port associated with the transponder (use Windows Device Manager->Ports COM & LPT if you are not sure), set the protocol to NMEA and set the baud rate (38400 for Vesper and em-trak, 115,200 for AMEC). Some programs can auto-detect and setup the COM port automatically.

You should then start to see and be able to use all available marine data in your app.

Finally, if you already own an AIS transponder that doesn’t have these multiplexing capabilities, you can add this functionality with a Wi-Fi-based multiplexer / gateway.  We recommend the following products based on different scenarios:

Hopefully this article will give you some ideas on how to get more out of your marine electronics as you consider using iPads, phones, Android tablets and PCs on your boat.

As always, we welcome feedback and questions as well as other ideas you might have for solving the marine data puzzle.

Dan Winchester
Reply
Because it multiplexes all data to 0183 format not all 2000 data can be transferred, for example engine data is not supported by 0183.
Doug Miller
That is correct. NMEA 0183 does not have sentences to match all possible NMEA 2000 PGNs - engine data being the most notable as you have mentioned. It is possible to use a pure NMEA 2000 WiFi solution such as the Actisense W2K-1 in NMEA 2000 mode but then the challenge will be finding apps that can use all the PGNs available on the network. Or do conversions to SignalK and use an appropriate app.